How is all this data going to help me increase the bang for my marketing buck? (click to enlarge) 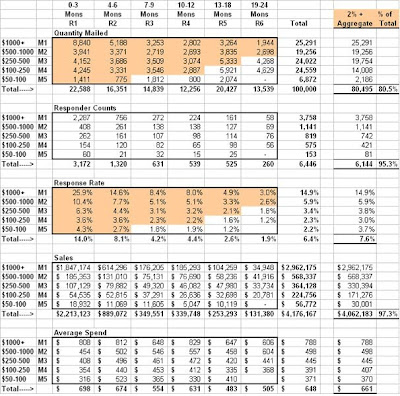 A friend sent me the above chart and asked me what I thought of it. The author suggests, “Shaded cells reflect that 80,495 customers reside in those cells that received a 2% or more response rate. So about 80.5% of the mailing went to customers who had 2% plus response rate. To the right of the sales grid, you will notice that the sales generated from these customers were $4,062,183 or about 97.3% of the total sales for the event. Hey, that means 97% of the sales were generated from 80.5% of the cost. Why would I mail to the other 19.5% of the mailed file? If we had known in advance which of the cells would have generated less than 2% response rate, we probably would not have mailed them. Wouldn't it be nice to know in advance which cells will generate the most sales.” He claims that if he took the top 86% and mailed it twice, he could have increased revenues 72%.

Sounds magical right? This is classic RFM (Recency, Frequency, Monetary) analysis. But each time he applies the same analysis, he will have to cut another 20% to make his scheme work.

The largest publisher of children's books used to send them out before collecting the money. Their CFO suggested that they should cut out the highest non-paying ZIP codes. Sure enough, their bad debt plummeted. It worked so well, that they did it again next year. By the third year, their warehouse was getting larger than necessary and sales dropped dramatically.

Everyone wants to cut wasted spending. Retail pioneer, John Wanamaker said, “Half my advertising is wasted... I only wish I knew which half.” Few companies SHRINK to greatness.

Dick Cabela's in his common sense wisdom said, “I don't want to know that I can cut 20% of my mailing and only lose 5% of sales, tell me how to grow my circulation, not shrink it.”

You cannot grow circulation with RFM. It is the worst possible strategy for anything but the shortest term. Followed for the long haul, it will DESTROY your company.

Miglautsch Marketing has been helping companies GROW their circulation for decades. Give us a call and we can offer you positive, understandable alternatives to RFM.